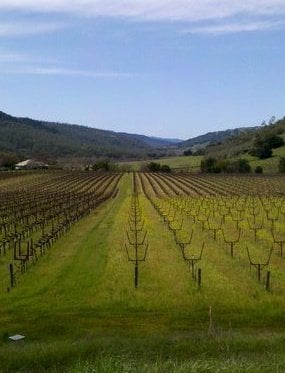 If I had to sum up living in Northern California in only a couple words, it would be sun, sun, sun, warm, sun and wine.  I have to admit that I live in the most beautiful part of the world.  The temperature is between 65 and 85 every day.  It is sunny and clear, complimented occasionally with a light breeze.  There are always flowers blooming and birds chirping year round.  I’ve actually gotten into arguments with friends about which day was more beautiful: today, yesterday or the day before (“Well yesterday had a slight mild breeze…”).  This amazing weather is not just good for the people, it’s good for agriculture and it is *great* for wine.

Wine-grape growing has got to be one of the pickiest, most neurotic forms of farming in the world.  Everything from the soil constituents to the berry traits is monitored with a hawk-eye by the farmer and the wine-makers.  In viticulture (grape growing) there is a popular term called “terroir”.  This is French for the flavor characteristics a given region gives the food grown there.  Terroir is influenced by the soil, the elevation and most notably the climate.  All three have to align for the perfect wine to be made.  Too hot and you get a very jammy wine (try something from the central valley to see what I mean), too cool and your vines might just die.  Growers work to stress their vines to bring out more of the flavor elements; they manipulate water and fertilizer to try to acquire the best possible taste.  But the reality is, you can manipulate the plants all you want, if you have a bad climate you have bad wine.

It turns out that regions like Napa and Sonoma know this well as they have a fantastic climate for viticulture, and most likely have global climate change to thank for it.  During the late 20th century, a small increase in temperature of a little more than 1 degree Celsius over less than 50 years resulted in a substantial increase (65 days!) in frost-free growing days.  It also moved up the growing season in the Napa and Sonoma valleys, allowing buds to burst out early by over two weeks.  This change in climate just so happened to coincide with when the Napa valley began dominating the global wine scene with amazing high quality wines.   Coincidence?  It depends who you ask.

Now this is where making connections between climate change and flavor becomes tricky.  How does one evaluate the quality of a wine?  Isn’t it very subjective?  The answer is yes and no.  There are certain components you can measure.  Aside from sugars which obviously contribute to the wine’s flavor, tannins and other phenolics are responsible for  the astringency of wine, while anthocyanins contribute to the color.  All of these constituents are pretty easy to measure.

But really, quality as we perceive it, is a combination of many factors and this is where making the connection to climate change becomes tricky.  As a result, connoisseurs have focused more on subjective analyses giving wine a rating from 1-100 for example (as with the Sotheby’s rating system).  It turns out that the change in climate that occurred in Napa in the second half of the 20th century was closely connected to increased scores on the Sotheby’s rating system.

It seems like this is an open and shut case, but correlation is not necessarily causation.  It just so happens that during this time there were some major innovations in agriculture: new pesticides, fertilizers and equipment.  In reality it could be a perfect storm (pun intended) of new practices and a better understanding of the science of grape growing and wine making coupled with a more amenable climate with a longer growing season and fewer frosts.

Causation, correlation or just reason for celebration, the prevalence of affordable, bold and delicious wines in Northern California coupled with a mild climate make it an ideal home for person and berry alike.

Minda has a PhD in Biology from Tufts University and is a science blogger in the Bay area.  When unable to afford a $200 bottle of Opus One, she enjoys the more affordable 7 Zins from Michael David in the Central Valley.  This is California after all.